The digital artefact that I have been completing for BCM302 – Advanced Digital Media Project is the curation of an online gaming persona known as MastroFUT.

‘MastroFUT’ (meaning Mastro FIFA Ultimate Team) is an online gaming persona taking place on Instagram and Twitter, accompanied by a Reddit account called MastroGaming. My online persona and its related content are based around the FIFA game series by EA Sports, primarily during the release and first few weeks of FIFA 20. As discussed in my initial project pitch, the online persona originally focused on gaming in general under the name ‘MastroGaming’ on all platforms. The reasons for making the change to MastroFUT were outlined in my project beta.

I developed the MastroGaming persona because I wanted to complete a digital artefact project that focused on my love of gaming and would be able to utilise my skills in content creation, social media, and marketing. My plan was to mainly create content about FIFA as this was the game I played the most and was best at in terms of gameplay ability, but I was also interested in making content about other games I was playing at the time such as Pokémon GO and Red Dead Redemption 2. I intended to develop an expert persona in these online gaming communities and create content relating to tutorials, tips, tricks, news, guides, and general gameplay. Gaming is something I enjoy doing outside of the university setting and was going to do regardless, so being able to create a project around this topic was essentially killing two birds with one stone.

When bringing this idea into fruition, I started to conceptualise the audience of my content. I noticed that members of the distinct online gaming communities that I’m also a part of are quick to consume content that will make them better at the game (this is most prominent in games that include an online multiplayer element). Certain gamers have always played for the competitiveness, but I believe the rise of Esports (which is set to surpass an annual revenue of $1 billion US in 2019 (Mantesso 2019)) has driven the gaming industry in a direction where not only casual players are heavily catered for, but also professionals and ‘hardcore’ gamers.

This concept was even discussed in 2014 when The Guardian explained how regular gamers are often pitted against professionals when engaging in online games such as Call of Duty, League of Legends and Dota 2 (Allford 2014). As a result of noticing this personally and further research, I decided to aim my content at non-professional gamers who still wanted to improve, be competitive and learn new things about the games they play. My end goal was to develop MastroGaming into an ‘expert’ persona in the FIFA community, and any other gaming communities I penetrate. This expert persona in gaming specific communities would be generated via my content and how I carried myself in the various publics I existed in (Marshall, Moore & Barbour 2019, p.155).

The inspiration for MastroGaming came from the existing experts in the FIFA community, which include FIFA Esports players such as Kurt0411, and content creators such as NepentheZ and jake.trading. I replicated these experts by not including anything FIFA related in my name to not limit myself to only creating content about one game, and also having professional artwork for my online profiles, which I ordered on Fiverr from rvdesigner, a freelance graphic designer who specialises in creating artwork for gaming profiles.

The first important learning moment for this project came when I decided to shift the direction of the project to a gaming profile to a FIFA profile. I started MastroGaming during the lead up to the release of FIFA 20, the newest installment in the series, so I knew much of my content was going to focus on this to leverage the hype behind the new game. I began by creating visually appealing content for Instagram, Twitter and Reddit in the form of a stat prediction for the new players being added to the game, with the intention to portray myself as an expert. I was pleased with the audience reaction from Instagram, receiving 43 likes on one of my first posts despite being a brand new account. 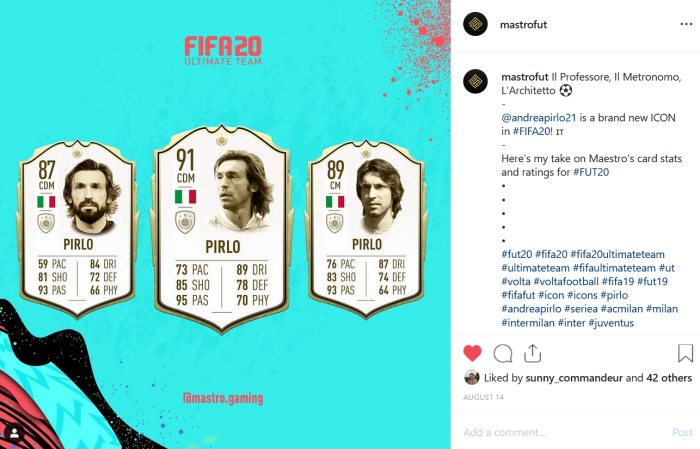 I also started streaming on Twitch as one of the first things I did for MastroGaming. My intention here was to support my expert persona on YouTube, Twitter, Instagram and Reddit through casual play. This was inspired by existing FIFA experts such as Aa9skillz and Nick28T who also stream on Twitch with a much more casual approach compared to their YouTube videos and Twitter posts. I also thought this would be a good opportunity to record video content while I was already playing a game naturally, and then reuse this for videos on YouTube. My live streams included gameplay of FIFA 19, World of Warcraft Classic, and the FIFA 20 demo, while my audience primarily consisted of my friends from university as opposed to my audience on Instagram, Twitter and Reddit.

I then begun creating my first piece of video content for the MastroGaming YouTube channel. This process didn’t go as planned due to many technical difficulties with my video capture card, which worked fine when live streaming on Twitch. I eventually got around to filming the video which involved writing a script, recording the gameplay and voice over, filming myself, and making the thumbnail and any other graphics. This all took much longer than I expected, as when I’ve previously made videos with similar steps of production I’ve been able to do them in 6-12 hours depending on the video length. Combining the gameplay element was extending the process and the effort/time commitment felt quite large for a YouTube channel starting with 0 subscribers.

Coupling this with Twitch streaming and creating the content for Twitter, Instagram and Reddit would be a gargantuan task, so I decided to stop the YouTube channel completely in order to focus more on the other platforms. I knew I could produce at least one or two piece of content per day to be used across all three of the other accounts, and I was enjoying the process of making these posts more than the YouTube video content so I thought the time would be better spent doing this. As a result of this decision, I also stopped live streaming on Twitch; despite this being a much less time-consuming process, I wasn’t enjoying it as I was only streaming to an audience of my friends and didn’t want to set up all my recording equipment whenever I was just casually gaming. I felt like I would be much better at streaming if I had a dedicated audience that I could commentate to like many of the large streamers on the platform.

In addition to shifting the direction of the project to just focusing on the Instagram and Twitter content, I also decided to change my name and branding from MastroGaming to MastroFUT in order to better fit in with the FIFA communities on these platforms. The next important learning moment came when I started dedicating my full time and effort with the Instagram and Twitter content for this project.

After only creating a few more posts on Instagram using my new persona, I was messaged by TheFutAssistant, an account with 2700 followers, with the proposition of taking one of my ideas and turning it into a series collaboration with him. After a few successful posts, I was asked to create content for his Twitter and Instagram on a regular basis. The process involves TheFutAssistant letting me know what type of content he needs and what exact visual elements and text he wants included, as I only create the images and let him write the post descriptions.

I was also able to engage in a collaboration with another large FIFA account; AntonFIFA, who has 9600 followers, put up a callout on his Instagram story for editors to contact him for work. I informed him that I could create the content he was looking for, and I now also create regular content for him, and he even includes me in his page description as an editor. The process for creating the images is the same as TheFutAssistant, Anton sends me a brief of what content he needs created and the exact visual elements and text he’d like included in the final image. 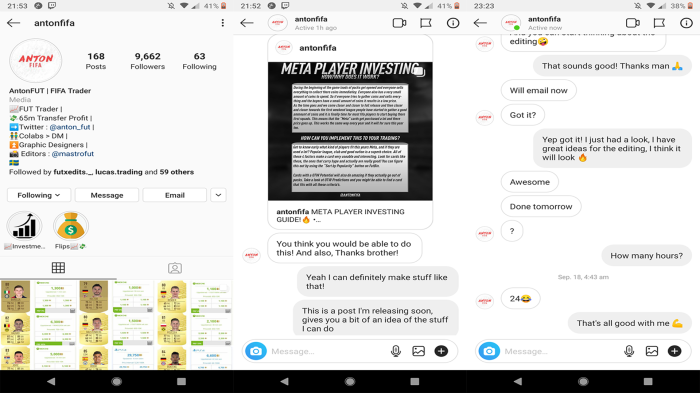 Having both of these large accounts bring me on as their editor gave me feedback that my content was professional, well made and to the standard of existing experts in the FIFA communities on Twitter and Instagram. It also gave me the realisaton that my project was leaning towards also being a graphic design consultant, as I was getting experience with receiving briefs and discussing deadlines with clients.

These collaborations were giving me a steady stream of content to upload to my own page, in addition to the posts I was making for myself. The type of posts I make include FIFA player reviews, investing guides, trading tips, and general designs and edits, which all include the same process for design in Photoshop.

Example of a player review

Example of an investing guide

Example of a trading guide Example of a generic design/edit

I use Photoshop for my designs and they all use the process of combining existing assets into one final product. This means none of the backgrounds, cards or other visual graphics were drawn or created by me from scratch; they were either existing Photoshop assets or imported from a graphics pack directly provided by EA Sports for content creators.

Between September 15 and September 29, I uploaded a total of 17 dedicated Instagram posts and saw my follower count rise from around 50 to over 300 (averaging around 100 per week after I started collaborating with AntonFIFA and TheFutAssistant). Similarly, I saw my Twitter account grow from less than 30 followers to close to 300 as well. The overall amount of likes and comments I was receiving on my posts also grew, and I was receiving enough engagement on Instagram to leverage the insights and analytics received from switching to a business account.

I’ve been able to determine that my most popular content is the economy guides I make for Anton, as they make up the posts that are most viewed and most engaged with on my page. These economy guides focus on tips, tricks and methods for making coins (the in-game currency) in FIFA 20. These kind of posts have also helped with my goal of becoming an expert persona in these online communities, as members of my audience have also asked me for advice through personal messages and comments on my posts.