Before you read on any further, please be advised that this post is aimed not to be biased towards any brands or products, the stats and specification comparison that are included is purely to educate individuals with additional information they might not be aware of. This posts intention is simply to be an academic piece exploring an interesting concept of human behavior.

Android and Linux are two of the most popular open source, or generative software, with Android running on 65% of mobile devices as of April 2017, and Linux distros (distributions) such as Ubuntu and Linux Mint are currently being used on 21% of laptops and desktops.

In regards to locked (closed source) vs generative (open source) platforms, you would think people would go for the latter, but surprisingly this isn’t the case, at least in Australia.

Lets start with mobile phones, Apples iPhones are clearly the more popular choice of phone compared to anything running an Android OS, just by observing people you come across you can see this. But with inferior technology compared to other cheaper alternatives, an OS you can’t mess and a walled-garden of apps, why would you have one? 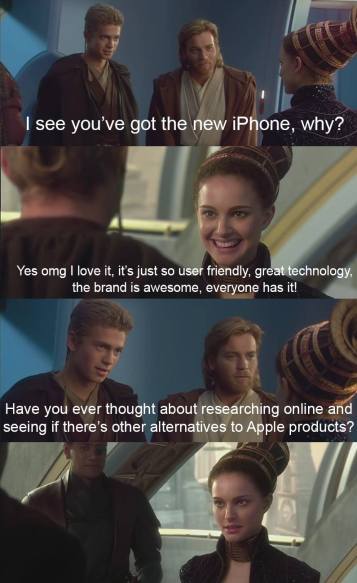 Don’t believe that Apples technology isn’t that crash hot compared to its competitors?

Here is the latest Apple iPhone 7 Plus

Here’s our next subject, the Xiaomi Mi MIX, which is currently the Chinese company Xiaomi‘s highest end smartphone.

And while you can’t buy the Mi Mix in Australia directly, you can have it shipped from China through various re seller sites, due to this prices vary but you’ll be able to pick one up for around $800-900 AUD, or less if you’re lucky.

This way of thinking can be applied to computers too, Linux was one of the first open source softwares invented and yet Windows and MacOS are still more widely used. A Linux based OS gives you the ability to choose which variation of Linux you prefer, offers better security and is often a very small file size compared to other Operating Systems, it’s also free!

It makes you wonder why things such as the Xiaomi phones or Linux operating systems aren’t used more, particularly in Australia, if they post such greater margins of advantage compared to the mainstream choices, why are they losing out? It’s likely you’ve never came across Xiaomi or Linux before unless you knew what you were looking for.

It’s ultimately an interesting combination of brand preference, brand loyalty and resistance to change that keep these open source wonders closed. Consumers may argue that their Apple products are more user friendly or are more luxury, maybe or maybe not this is true. The cognitive thinking that goes behind choosing products and the subconscious choices people are making has become normalized in Australia, by looking at the people around you, it seems that everyone is following each other in terms of the technology they use, and it’s interesting to see based on the knowledge available in terms of comparing product choices.

I feel the best way to end this post is with a quote by Tech Writer Gary Sims:

“there are lots of problems in the world and lots of reasons why people get angry with each other, however which smartphone you use shouldn’t be one of them.”

34 thoughts on “Android & Linux: Open Source but Closed in their own way”